The Colorado Department of Public Health and Environment announced on Friday that there are several new vaccine options available for the 2013-2014 flu season.

New options include quadrivalent shots and nasal sprays that provide protection against four flu virus strains rather than the usual three. There is also a new vaccine available for people with severe egg allergies. Eggs are used in the traditional process for producing flu vaccines

The U.S. Centers for Disease Control and Prevention recommends that everyone over the age of six months receive a flu vaccine. Children between the ages of six months and eight years who never received a seasonal flu vaccine are recommended to receive two doses of the vaccine spaced at least four weeks apart 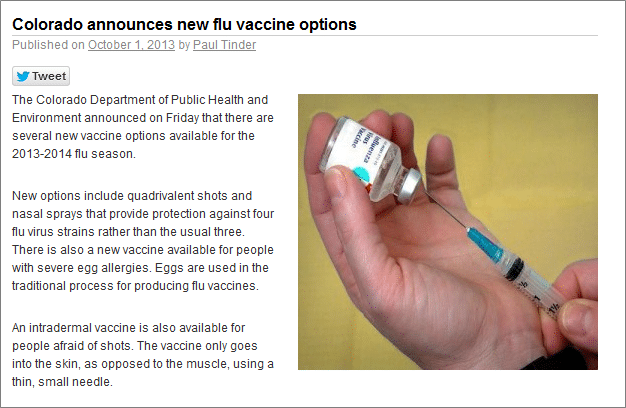 Flu season is approaching in the United States, and every American adult and child must be ready with the proper health shield to avoid getting sick. As a result, many doctors specializing in pediatrics in Littleton have begun to offer new flu vaccination options for children and the rest of the general public. “Since flu season is so unpredictable, we recommend getting vaccinated as early as you can. It is important to get vaccinated before outbreaks occur in your area, especially since it takes two weeks for the flu vaccine to become effective,” says Rachel Herlily of the US CDC.

For this flu season, vaccine manufacturers have developed new types of flu vaccines. One of the new vaccines available to the public are the quadrivalent shots, which protect the person from four different strains of influenza, instead of the usual three strains. This type of vaccine is also available in nasal spray form.

People allergic to eggs can now take flu vaccines as well, with a new preparation that follows a different procedure than the traditional egg-based vaccine, making it safe for children suffering from egg allergies (one of the more common food allergies in young children). People with needle phobia can also relax during vaccination with a new intradermal flu vaccine that is administered under the skin instead of into the muscles.

With a new set of flu vaccines that addresses common concerns, there is no longer any excuse not to get vaccinated. Before this year’s flu season turns for the worst, set a flu vaccination appointment for your children with a trusted Littleton pediatrics clinic, such as Focus on Kids Pediatrics.