Chickenpox is a highly contagious disease caused by a virus called varicella zoster. Before the vaccine that protects against chickenpox became available in 1995, it was one of the most common diseases of childhood, affecting almost all children before the age of 9 years

Most children with chickenpox have relatively mild symptoms. They commonly develop a very itchy, blister-like rash that appears 10 to 21 days after exposure and infection with the virus. The blisters usually appear first on the torso and scalp, often surrounded by a reddened area. They may spread to other parts of the body, including the face, arms, and legs. In time, the blisters become crusty before finally healing. Most children develop a mild fever during the course of the infection 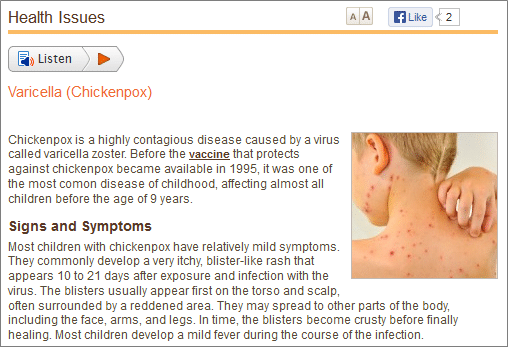 Chickenpox is still one of the most common diseases affecting children today, despite the presence of a vaccine. Although proper vaccination has stymied the severity and frequency of chickenpox outbreaks in the United States, there are certain instances in which resting at home is no longer sufficient for instances of chickenpox. If your child is exhibiting any of the following signs, it may be time to set aside the calamine lotion and oatmeal baths and set an appointment with a trusted pediatrician in Littleton.

A severe headache and constant vomiting are not common chickenpox symptoms and can be a sign of another very serious illness, such as encephalitis or inflammation of the brain. Children suffering from chickenpox combined with persistent coughing, wheezing, and breathing difficulty may have contracted varicella pneumonia. Chickenpox rashes that remained beyond two weeks, involvement of the eyes, or rashes that led to itching and couldn’t be relieved by popular home remedies are also possible warning signs of something worse than chickenpox.

It is important to note that developing complications from a chickenpox infection is quite rare for children. However, the very young ones and those who have immunodeficiency problems have a higher risk and may encounter such complications as dehydration, pneumonia or encephalitis. Parents should closely monitor their children’s condition when the kids are infected with chickenpox, and should consult an experienced Littleton pediatrician, such as the doctors of Focus on Kids Pediatrics, for advice on other conditions to watch out for.